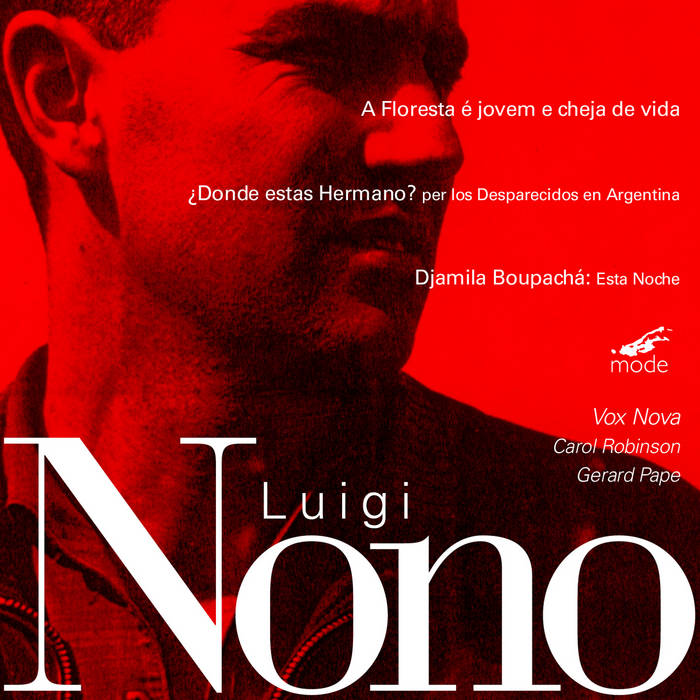 Mode's new Edition focusing on the work of Luigi Nono will include not only include the notated works, but also recreations of his later pieces. These works, mainly from the mid-sixties on and including A floresta, are orally transmitted "interactive" compositions - in many cases without a completed score. Created with Nono's preference to experiment with certain musicians and sound engineers, they often made use of live electronics to achieve a unified, constantly mobile sound world.

The vocal works on this disc come from both stages of Nono's oeuvre, and are of a decidedly political bent. All feature extended vocal techniques, using different mouth positions to produce a wide range of vocal colors which often transcend the meaning of the words.

A floresta é jovem e cheja de vida (The Forest is young and full of life), the longest work here, has no complete score. Prerecorded 8-channel tapes comprising recited texts by members of The Living Theater, along with the voice of soprano Liliana Poli, whose micro-interval vocal technique fuses with the "flutter-tongue" and multiphonic techniques of clarinettist William O. Smith, form an equal partner to the live voices of Voxnova and clarinettist Carol Robinson. Voxnova's performance was created after intense study of Nono's sketches, notebooks, preparatory tapes and testimonials from the original performers, including studies with a Vietnamese man to insure the proper pronunciation and melodic tones of the language and Ms. Robinson's extensive work on timbre with Mr. Smith.

¿Donde estas hermano? is a work derived from the final chorus from Diario Polacco, n.2, but differs from it in that there are no live electronics. Evoking the voices of the dead, the singers project an extremely quiet sound world broken by suspended silences.

In a world torn apart by different forms of oppression, the song of the Algerian woman Djamila Bupachá survives as a symbol of the possibility of freedom; a political-philosophical path which Nono actively pursued.