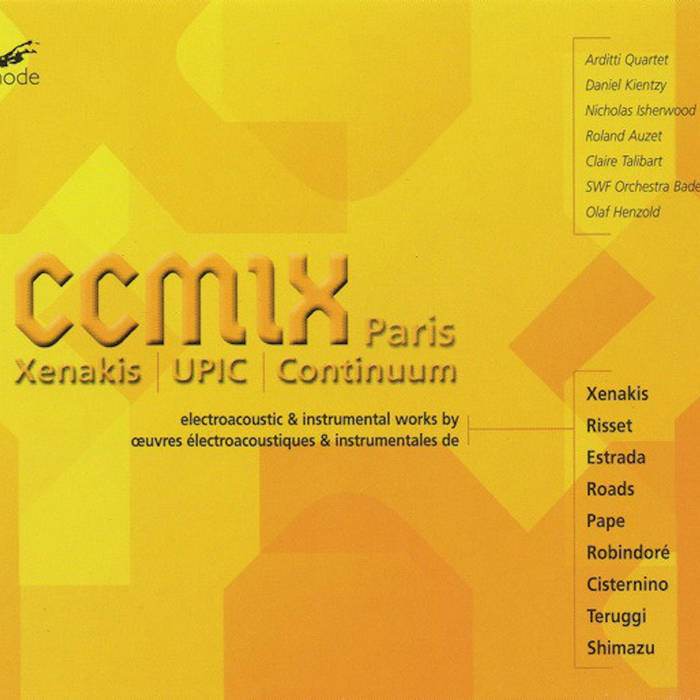 The UPIC system was conceived by Iannis Xenakis in the early 1950s; the first version of UPIC was built by Xenakis' research center, the CEMAMu, in the late 1970s, and the system continues to be developed to this day. Instead of a keyboard to perform the music, the UPIC's performance device is a mouse and/or a digital drawing board. These are used to trace the composer's graphic score into the UPIC computer program, which the ninterprets the drawings as real time instructions for sound synthesis-the composition/performance of a graphic musical score and real-time sound synthesis are unified by the UPIC's approach.

Xenakis' Mycenae Alpha, the first work entirely realized on the UPIC, opens the set, which also includes the first issuance of his legendary Polytope de Cluny. In 1980, Julio Estrada composed his one and only UPIC work, eua'on, an experience that resulted in a veritable revolution in the composer's approach. Also included is his large orchestral work eua'on'ome, an orchestral realization of the original UPIC score.In the 1990s, the UPIC system fascinated a whole new generation of composers including Brigitte Robindoré, Takehito Shimazu, Nicola Cisternino and Gerard Pape (CCMIX's director). Jean-Claude Risset and Daniel Teruggi, coming, respectively, from the direct computer music synthesis, and the "acousmatic" approaches, also found ways to make the UPIC system their own in the 1990s.

Rounding out this collection are recent works by Curtis Roads and Xenakis' classic tape composition Polytope de Cluny. These works have been included to demonstrate that Xenakis' legacy-both in his own electroacoustic music as well as in his theoretical influence on other important electroacoustical composers, such as Roads-goes far beyond the UPIC system.