Advance of the Fungi (mode168) 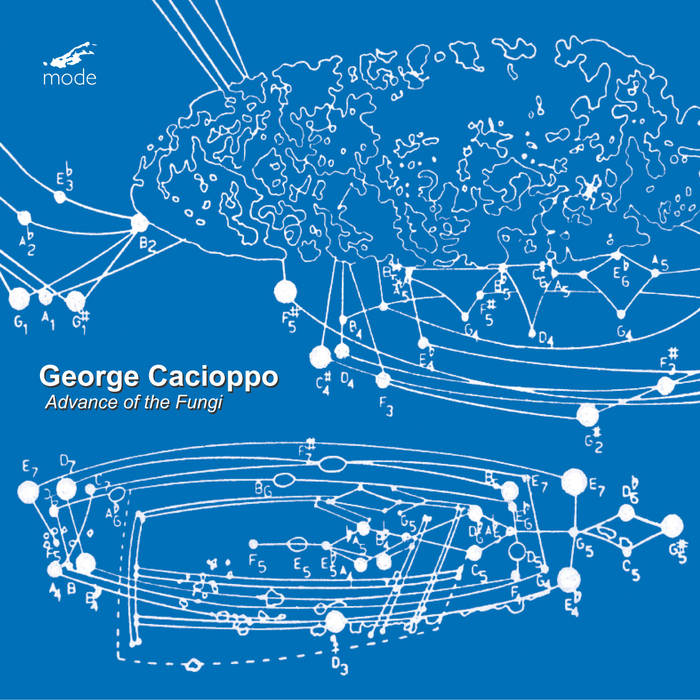 As a creative artist, George Cacioppo was a gentle chemist. His life and work didn't move in straight lines from one point to another. After his early compositions of the 1950s, each musical work has its own unique identity and character. That uniqueness is heard in his individual overlappings of sound-painting, his sense of forward motion in time, and the lyrical characteristics and poetic implications of each composition. Cacioppo was careful with the details of mixing things, but rhapsodic in his large-scale thinking, and poetic in the fanciful titles for his music.

Through his life Cacioppo was variously present; at times congenially gregarious, at others mysteriously absent or invisible. He had many devoted artist friends, particularly his occasional composition students. His primary money-earning profession was as a radio-engineer and program director for an Ann Arbor FM station.

For medical or psychological reasons, Cacioppo was sometimes many months in rehabilitation, and few of his friends knew why or where he was. The medical conditions were due to Crohn's disease, for which he had recurrent surgical operations. This illness led to his death in 1984.

" In the mid 1950s, after I had not seen him for nearly a year, he showed up at a bookstore where I worked. He was delightfully all smiles, and though he addressed me as "Gordon", he asked if I would verify my name. He had returned from several months of electroshock therapy. Nevertheless he was soon back at his radio occupation and composition of new works.

Cacioppo's compositions from the 1950s were made in the context of requirements for his academic studies. Of the four that have apparently survived, an early Piano Sonata exhibits Cacioppo's individuality even though made within an academic template. One of my special Cacioppo memories was a 1952 performance of his master's-thesis, Overture, with the Royal Oak Symphony, in which I played horn. The String Trio, begun in 1959, was the first of Cacioppo's works performed on the first ONCE Festival, in 1961. A beautifully crafted work, though with echoes of an academic past, it is original and without a wasted note or gesture.

But Cacioppo's unique creative imagination appeared with Bestiary I, Eingang (1961). Thereafter he made one unique work after another, some so different from the his preceding compositions that the character of his creative continuity was not easily apparent. The 1960s activities of the ONCE Festival were the primary impetus for Cacioppo's extraordinary creativity in that decade. Everything he composed was performed, then by devoted musicians. Cassiopeia (1962) became an immediate classic, partly because of its mysterious but practical map-like score. As the ONCE Festivals continued something of a fan-club of performers developed, anticipating the rehearsals of his next piece.

Listening through Cacioppo's music now, many decades later, my memories still hold true. His use of instruments (and voice) is sublime. Each individual instrument plays with indigenous sense, as though he performed it himself. The diverse ensembles of his compositions are translucent and clear-sounding even within relatively complex sound-textures. With the "limits" of sonority inherent in his solo piano pieces - sounds articulated mostly from the keyboard - Cacioppo mysteriously extends the resulting sound-spectrum without exaggerated physical foolishness.

Finally, it is Cacioppo's timeless imagination with the theatrical unfolding of sonorous events and textures that elevates each of his compositions, all of which bear well the passage of time."
--- Gordon Mumma, May 2006