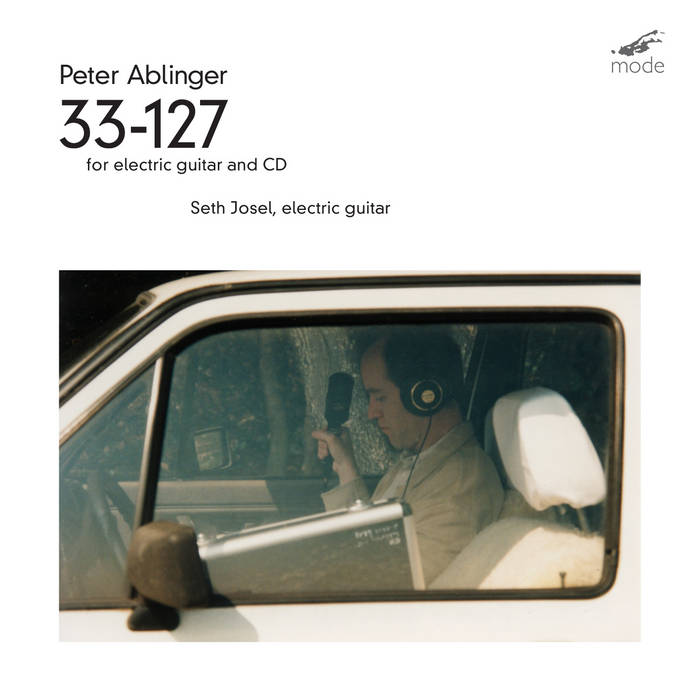 From orchestral works to installations, Peter Ablinger's oeuvre explores the differences between reality and our perception of reality. In 33-127 for electric guitar and CD, Ablinger confronts the rational, human division of sound into musical scales with the complex acoustical reality of any given moment - its "noise." In each of the 95 pieces that make up 33-127, these two realities come face to face again and again: scale, noise, scale; scale, noise, scale...

In each piece, a scale descends, with gentle and unpredictable irregularities of both rhythm and pitch, from the top of the electric guitar's range to the bottom. The sound of the instrument is clean, clear, and precise. At some point in each of these tranquil, neutral scales - all but one of them, anyway - a cacophony of recorded street noise bursts in, which the guitar, now louder and rougher in tone, doubles, playing an orchestrated spectral analysis of this recorded noise. Just a moment of this though, or a few seconds; then the scale resumes as if nothing has happened.

This common use of scales in Ablinger's music is perhaps influenced by his background in graphic design, including his studies with Roman Haubenstock-Ramati, who composed many graphically notated scores. The basicness of a scale, like a stroke from a pencil, functions as a degree zero of human making.

Noise, or rather, "Rauschen" (the German term) has been a prominent part of Ablinger's music for more than 20 years. For Ablinger it is never simply a matter of mastering or claiming noises for musical purposes, but rather of acknowledging and confronting the place of all sounds in the general "noise" of reality.

In 33-127, the guitar is neither the soloist nor the protagonist. It and the "Rauschen" are equals in seemingly endless near-repetition, building up to a sublime incomprehensibility.

Peter Ablinger (born 1959 in Austria), began studying graphic arts and was inspired by free jazz, but completed his studies in composition with Gösta Neuwirth and Roman Haubenstock-Ramati in Graz and Vienna. Since 1982 he has lived in Berlin. Ablinger is one of the few artists today using noise without any kind of symbolism - not as a signifier for chaos, energy, entropy, disorder, or uproar; not to oppose something or be destructive; but rather for the sake of noise itself - to question the nature of sound, time, and space.